The United States Food and Drug Administration temporarily suspended imports of orange juice containing low levels of carbendazim, as recognized carcinogen. The chemical was discovered in orange juice products originating in Brazil. While China’s imports of orange juice are unlikely to be affected, primarily because of lower import standards, China’s juice producers are worried that the U.S. will also block imports of apple juice, which China exports to the U.S. in significant quantities. In 2011, approximately 44 percent of Chinese apple juice (primarily from Shandong and Shaanxi provinces) was exported to the U.S. The article warns China’s juice producers of a possible bumpy road ahead.

China’s and Brazil have striking similarities and differences in terms of their internet markets, and especially with regard to investment opportunities, social networking, and online advertising expenses. As Brazil’s internet usage grows, it has attracted such internet-related giants as Facebook, Amazon, and Netflix. Although China’s internet market is the largest in the world, its investment environment is much less friendly than Brazil’s. This is best illustrated, perhaps, by the many challenges that Google has encountered while operating in China over the past few years. Both China and Brazil have made great progress in terms of social networking. Brazilians’ use of Twitter is increasingly rapidly, whereas microblogging (primarily through Weibo) is of growing popularity in China. An approximate 250 million Chinese use Weibo. Online advertising expenses in Brazil are divided fairly evenly between advertisement through search engines and online “banner-style” advertisements. There is much less data on China’s advertising expenses, primarily because the pricing strategies of Chinese search engines aren’t transparent. 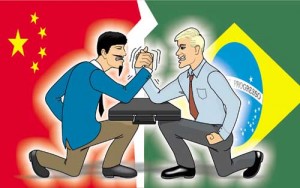 According Chinese Customs statistics, bilateral trade between China and Brazil in 2011 totaled USD $84.2 billion, an increase of 35 percent over 2010. China’s exports to Brazil were estimated at USD $31.8 billion, and imports from Brazil came in at USD $52.4 billion, a year on year increase of 30 percent and 37 percent, respectively. Brazil maintains a trade surplus with China of approximately USD $20.6 billion, and ranks as China’s 9th largest trading partner. According to Brazil’s trade statistics, bilateral trade volume in 2011 totaled USD $77.1 billion, an increase of 37 percent over 2010. Brazil exported USD $44.3 billion and imported $32.8 billion. Brazil estimates its trade surplus at USD $11.5 billion. China is Brazil’s largest trading partner, largest export destination, and second largest source of imports. The United States is Brazil’s second largest trade partner (USD $601 billion) and Argentina (USD $396 million) is its third largest.

According to the Peruvian Automobile Association, Chinese automobile sales to Peru have increased considerably in recent years. Peru now accounts for 14.4 of China’s car sales.  Chinese car sales to Peru could increase by an additional 25 percent in 2012.

Jiangxi Copper is one of China’s major copper producers, with six mines located in China and two located overseas. Its project in Peru is progressing very slowly due to resistance from local residents. Environmental damage caused by other firms has generated local opposition to future projects. Company executives plan to submit an environmental impact assessment to local authorities in order to ensure project progress. At this point, production is expected to be delayed until 2014. According to company representatives, overseas mining operations face a higher degree of uncertainty, and are more like to run behind schedule.

China Development Bank and Peru BBVA Bank signed a USD $50 million loan agreement in December 2011. The loan will be used for electrical infrastructure projects in Peru, and is part of a broader memorandum of understanding between China and Peru for substantive bilateral cooperation. According an official from Peru BBVA, is also evidence of growing bilateral cooperation and of mutual commitment to economic development.