In their Inter-American Dialogue report, “The New Banks in Town: Chinese Finance in Latin America,” Kevin Gallagher, Amos Irwin, and Katherine Koleski offer the first comprehensive summary of China’s lending practices in Latin America and the Caribbean (LAC). The authors provide estimates of the volume, composition, and characteristics of Chinese lending to the region since 2005, offer comparisons to international and Western lending institutions, and examine some commonly held notions about Chinese loans to LAC. These include claims that China’s loans have less favorable terms than those of international financial institutions (IFIs) and Western banks, that Chinese lending carries few policy conditions, and that Chinese lenders impose less stringent environmental guidelines than their Western counterparts. The report lends credence to some of these claims, but less so to others.Through careful examination of government, bank, and press reports from both China and recipient countries, and through interviews to confirm loan details, the authors estimate that Chinese loan commitments to Latin America have totaled approximately $75 billion since 2005. Furthermore, China’s 2010 commitments to the region (totaling $37 billion) exceeded those of the World Bank, Inter-American Development Bank, and the United States Export-Import Bank (US Ex-Im Bank) combined for that year. The report also compares the terms of China’s loans to the region, finding that Chinese Development Bank (CDB) terms are often more stringent than those of the World Bank, while the China Export-Import Bank (China Ex-Im Bank) offers lower interest rates than the US Ex-Im Bank. The authors also confirm that there are virtually no policy conditions associated with Chinese loans, but explain that Chinese banks often require equipment purchases and sometimes oil sale agreements. Finally, the report suggests that Chinese finance operates under anexpanding set of environmental guidelines, but that these guidelines are not yet on par with those of IFIs or Western lending institutions.THE NEW BANKS IN TOWN: CHINESE LOANS IN LATIN AMERICA (FULL TEXT)THE NEW BANKS IN TOWN: CHINESE LOANS IN LATIN AMERICA (ABSTRACT) 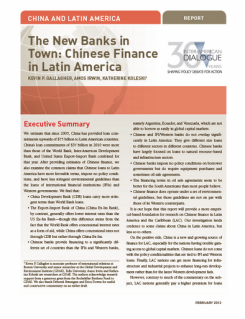