Skip to content
Date: April 13, 2012Author: chinaandlatinamerica 0 Comments
Inter-American Dialogue
CLICK HERE to see the full paper, which was prepared for an upcoming University of Miami conference on China and Latin America.
China’s Ya-Fei-La (亚非拉) or “Asia-Africa-Latin America” construct was conceived during the Mao-era in a movement to promote developing country solidarity. At the time, China saw itself as a “spokesperson” for what it termed the “struggle of third world countries.” Thirty years after implementing its policy of “reform and opening-up,” China sees its role among developing nations in much the same way. Though always willing to study other countries — their economic and political systems, development challenges, social policy, etc. –, its leaders still operate under the assumption that China has more to offer developing nations than the other way around — especially in terms of development assistance and a as model for economic growth. Once more, China is establishing its role as a leader among developing nations — formal references to aid and developing country assistance have increased significantly over the course of the 11th Five Year and 12th Five Year periods. 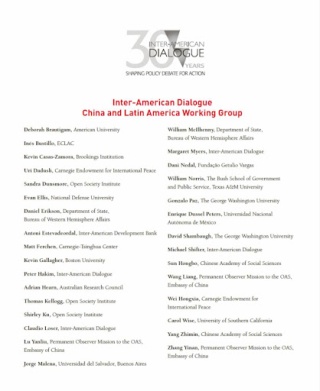 亚非拉人民要解放: Mao-era poster calling for the
liberation of Asian, African, and Latin American people
China’s academic literature on Latin America further illuminates its dominant perspective toward Latin America. Of the existing Chinese-language literature on the China-Latin America relationship, the vast majority seeks to derive jiaoxun (教训) or “lessons” from Latin America’s failed experiments in economic and social development. These “lessons” frequently are taught in China’s top universities, where students encounter numerous charts documenting China’s and Latin America’s divergent paths toward economic development. The economic demise of Latin America – often linked to import substitution and/or failed neo-liberal policy — is explained alongside China’s post-1979 growth miracle. Only one widely-published Chinese-language article looks to Latin America (and Brazil, in particular) for a viable development model. The article,lingyizhongjueqi, or “Another kind of rise,” considers Brazil’s approaches to dealing with rampant inflation and social inequality over the past three decades, suggesting that China might benefit from similar reforms.
Although China goes to some effort to promote mutually beneficial and win-win arrangments, China’s motivations for engaging the region remain firmly linked to its domestic interests. The premise of China’s “going-out” strategy, as described during the 17th Party Congress is to “realize China’s long-term economic and social development.” China’s global engagement remains driven by its leaders’ plans for domestic development as prescribed in 12th Five-Year Plan and, more recently, in Wen Jiabao’s 2012 Government Work Report — albeit with consideration for the “common development” of other nations.
Assuming the leadership makes incremental progress toward the objectives highlighted in its 12th Five-Year Plan, China is very likely to continue engaging Latin America as it has over the past decade. Latin America should anticipate relations with China that are still dominated by trade, as well as by an overwhelming interest in natural resources and agricultural commodities. This dynamic will produce ongoing challenges for Latin American policy-makers in terms of export primarization, extractive sector-related environmental degradation, competitiveness, intra-industry trade, and other issues stemming from China’s engagement with the region over the past decade.