The Inter-American Dialogue is pleased to publish this issue brief prepared by Carol Wise, associate professor of international relations at the University of Southern California. An expert on international political economy and development, Wise has written widely on trade integration, institutional reform, and the political economy of market restructuring in Latin America, and is currently completing a book entitled China, Latin America, and the End of Neoliberalism. Wise is also co-editing a collection of essays with the Inter-American Dialogue on “The Political Economy of China-Latin America Relations” to be published in 2013.

In addition to Wise’s assessment of Chinese FTAs in South America, our contributors will address such topics as China’s approaches to renminbi internationalization in Latin America, China Development Bank policy, commodities-related trends in the region, and China’s influence on Latin American industrial policy. We are pleased to recognize Open Society Foundations for its assistance in publishing this and forthcoming China and Latin America economics briefs. 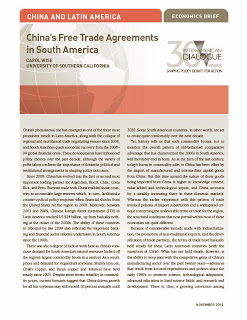