According to a report released by ANI, China’s Communist Party has announced a US $3.5 billion plan to flatten 700 mountains (more like “hillocks,” according to locals) in Gansu province to make way for a metropolis 50 miles from the city of Lanzhou in northwest China. China adds its “mountain”-moving exploits to a long list of major infrastructure projects now approved throughout the country.

(See The Guardian for a promotional video on the planned metropolis.)

Though proposed in an effort to stabilize China’s slowing economic growth, these projects are also consistent with urbanization targets outlined in China’s 12th Five Year Plan. In March of 2011, China’s leaders announced plans to increase urbanization by an additional 4 percentage points, so that by 2015, 51.5 percent of the population will reside in urban areas. The 12th Five-Year Plan proposes a series of massive infrastructure and construction projects to achieve this goal, many of which are already underway across the country.

China’s leaders have focused on the development of urban areas, including large cities and smaller town-cities, for many years as both a driver of economic growth and a means of addressing rural-urban inequality. Urbanization (chengshihua) remains a centerpiece of China’s efforts not only to transform the economy, but to improve quality of life for China’s rural residents, many of whom have yet to derive substantial economic benefit from China’s decades of rapid economic growth. Population transfer to urban centers is also thought to promote higher rates of consumption (a major element of China’s future growth strategy) by increasing income and improving employment-related opportunity.

While urbanization is a consistent feature Chinese development planning, there is debate in China regarding the best means of pursuing urban growth. Some have promoted the development of 40-50 “city agglomerations,” or groupings of major Chinese cities into mega metropolitan regions. Beijing and Tianjin cities and Hebei province in China’s northeast already form one such metropolitan mega-region, as do the Yangtze River Delta and Pearl River Delta economic zones. Chengdu and Chongqing will constitute a major urban center in central China, and the Bohai Economic Circle is becoming an important urban zone in China’s industrial northeast. This Lanzhou metropolis seems a likely fifth. Others prefer urbanizing large towns and small cities across the country. This approach is thought to more thoroughly extend the benefits of modernization to China’s widespread rural population. Through either approach, however, China’s leaders intend to expand urban areas and thereby generate income growth, higher rates of employment, and higher rates of consumption among China’s rural residents.

The plan also describes geographically-based “opening up” policies for coastal, inland, and border areas to achieve balanced growth and development across the country. The term sanzongliangheng or “two horizontal and three vertical” has been used to delineate urbanization and strategic industrialization zones throughout China. The Yangtze River is used as a horizontal axis to divide the country into “two horizontal” (northern and southern) portions. China is then divided east to west by a line drawn from Beijing to Guangdong, and another drawn vertically through Kunming in the center of the country. The 12th Five-Year Plan proposes urbanization and industry-specific reforms for each of the resulting geographical regions.

The proposed metropolis near Lanzhou is consistent with the plan’s proposals for infrastructure development in the western region. Others focus on industrial base revival in the northeast, modern equipment manufacturing in the central regions, and strategic sector development on the east coast are all initiated by provincial or municipal governments in these regions. The plan also mentions further migration of manufacturing and coastal industries toward inland areas, as has occurred over the past year in response to rising labor costs in China’s coastal manufacturing hubs. Chongqing’s “Liangjiang New Area,” for example, has been developed as a base for international manufacturing and service contracting.

Given this continued focus on urbanization and industrialization, Latin America should expect sustained demand for the region’s agricultural and non-agricultural commodities and for energy resources in coming years. Most analysts are predicting as much assuming sustained growth in China, which the central government predicts will reach 7.5%  in 2013. A private equity fund recently established by the Inter-American Development Bank and China Ex-Im Bank and run by SinoLatin Capital is counting on Chinese urbanization to sustain demand for Latin America’s commodities.

Assuming that China’s moves forward on its massive urbanization plans, the transfer of an estimated 360 million people from rural to urban areas over the next three decades will require related housing, transportation, and urban infrastructure. China’s leaders have announced plans, therefore, to build millions of units of low-income housing, large-scale hydropower plants, 45,000 km of high-speed railway, and 83,000 km of highway over the next five years.  Light rail, subway, and trolley car systems are proposed within cities. The 12th Five-Year Plan also mentions construction of “multi-layer inter-city” rail- and road-based traffic networks to connect major city groups across the country and promote a freer flow of goods within China’s domestic market. The National Development and Reform Commission approved US $12 billion for rail projects in China’s Fujian province and Xinjiang autonomous region. If China proceeds with even a few of these plans, it will require significant quantities of non-agricultural commodities, many of which will come from abroad. South America’s major exporters should therefore expect sustained demand for construction-related materials.

As China’s continues to modernize, energy usage is also expected to increase. The China Energy Group estimates that household energy use roughly doubles with urbanization.  A major portion of the 12th Five-Year Plan is dedicated to the “vigorous enforcement” of energy conservation, recognizing that China’s urbanization and industrialization efforts will mean much higher rates of energy consumption across the country. The plan aims to make non-fossil fuel energy sources account for only 11.4 percent of China’s primary energy consumption by 2015, for example.

Despite these efforts, however, China will continue to rely upon coal and oil to address higher energy needs consistent with population growth. Sustained demand for traditional energy sources will mean that Brazil, Venezuela, and Ecuador, in particular, should expect continued engagement from China’s oil companies, as well as from China’s overseas lending organizations – the China Development Bank and China Ex-Im Bank, for example. Colombia will also see more in the way of energy-related engagement.

China is growing increasingly dependent upon agricultural imports. Despite its focus on agricultural intensity to increase production, capacity for production remains limited. Desertification and environmental degradation threaten to further restrict China’s agricultural production capacity. Zhang Xiaoshan of the Chinese Academy of Social Sciences Rural Development Institute estimates that at current levels of demand, China will need to import 13 percent of its agricultural goods from abroad. Even high-ranking officials are concerned about the “700 mountains” project given that Lanzhou is frequently listed as among China’s most chronically water-scarce municipalities. Droughts frequently threaten crop production in Lanzhou. Construction of a new metropolis in Gansu will further limit food and water supply.

Former World Bank Chief Economist Justin Lin has argued that while China has a comparative advantage in the production of labor-intensive agricultural goods – garlic, mushrooms, and bamboo shoots, for example – it does not have a comparative advantage in land-intensive agricultural production, and is therefore best served by importing land-intensive products. South America’s major soy producers –Argentina, Brazil, and Paraguay, for example – have benefitted considerably over the past decade from Chinese demand. As Mariano Turzi points out, these countries have also been transformed by surging demand – from 2000 to 2011, the area under soybean cultivation in these three countries grew 188 percent. “In South America, soybean yields since the 1990s have been rising twice as fast as in the United States.”
Assuming that China, through the various mechanisms outlined in the 12th Five-Year Plan, is able to expand its middle class, demand for a more diverse selection of foods will grow considerably, as will demand for safer agricultural products. Whereas the Chinese diet used to consist largely of vegetables, rice, and other primarily vegetarian options, as incomes have risen, Chinese consumers’ demand for meat and other foods has grown considerably. Higher rates of meat consumption have fuelled imports of beef from Argentina and Brazil, as well as imports of soy for the production of livestock feed. Chinese consumers are also developing tastes for Latin American coffee, chocolate, wine, fruits, and other agricultural goods.
See the following article from Chinese Ministry of Commerce researcher, 李艳君, for more on Chinese food security. 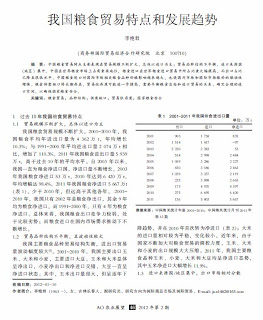