China has became a critical economic partner for Venezuela over the past decade. By means of the “China-Venezuela Joint Fund” and other mechanisms, China’s policy banks have offered more in loans to Venezuela than to any other country. But what is the likelihood of continued high-level, bilateral cooperation in a post-Chávez political environment? Tsinghua University’s Matt Ferchen, Chinese Academy of Social Sciences researcher, Sun Hongbo, and Venezuelan journalist, Andrés Rojas Jiménez, debated the future of China-Venezuela relations at the Inter-American Dialogue on March 22nd.

Sun Hongbo opened with an optimistic view of the China-Venezuela relationship. Economic complementarity, he suggested, will ensure cooperation between the two nations for the foreseeable future. With respect to China’s $40-$50 billion in loans to Venezuela, Sun also foresees little risk, noting that China’s loan contracts have sufficient precautions built in.

According to Matt Ferchen, however, the strength of the China-Venezuela “strategic partnership” will likely be tested in the coming years. China is unprepared for the possibility of significant political and economic instability in Venezuela, he added, and is fearful of losing its preferred status in a post-Chávez government. Ferchen agreed that economic complementarity exists between China and Venezuela, and will play a role in future engagement, but suggested that the extent of future cooperation will depend on economic and political developments in Venezuela.

Andrés Rojas Jiménez explained that China’s loans have done little to strengthen Venezuela’s economy. Following the creation of the China-Venezuela Joint Fund, oil exports to China jumped from 95,000 bpd in 2007 to 460,000 bpd in 2012. But Venezuela’s external debt also increased considerably. In 2012, Chinese loans accounted for 25 percent of Venezuela’s total external debt. Venezuela is also increasingly dependent upon oil exports for economic growth; exports of non-traditional goods are at the same levels as a decade ago. PdVSA, furthermore, has consistently fallen short of the eventual 800,000 bpd promised to China. Chinese entities recently criticized Venezuela for delays on certain projects, including some in the Orinoco.

Panelists insisted that however relations progress, there is a need for greater transparency and accountability in financing agreements and loan disbursement. All agreed that China and Venezuela will be taking a closer look at the nature of bilateral relations in the coming months. 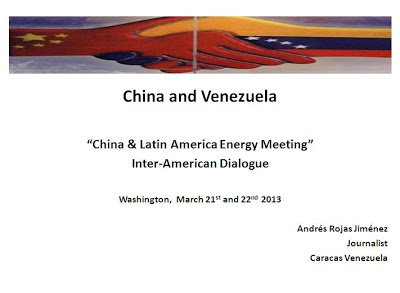