A new web site provides information in three languages on the HK Nicaragua Canal Development Investment Co. Ltd. (HKND). The Hong Kong company was granted a concession this week to plan and build a canal in Nicaragua. Legislation approved on Thursday by a 61-28 vote contains no specific route for a canal, however, and few details on financing or economic viability.

In addition to Wang Jing, HKND’s Chairman and Chief Executive Officer, the site lists Bill Wild as Chief Project Advisor, and Ronald MacLean-Abaroa as a spokesperson for the company. Wild, according the web site, has “successfully managed profitable infrastructure projects and businesses in construction and mining contracting; civil, mining and mechanical engineering; and building and waste management.” McLean can be seen discussing the project HERE.

Wild, McLean, and Wang
Through its web site, the company ensures readers (and potential investors) that there is indeed sufficient demand for a canal in Nicaragua: “Both trade volumes and ship sizes have continued to grow and signs suggest that the Panama Canal by itself may be insufficient to meet the requirements of 21st century global trade.” Some canal experts and opposition politicians have argued otherwise.
Now that the canal concession has been granted, Nicaragua is set to begin a feasibility study. British firm Environmental Resources Management (ERM, 2nd Fl. Exchequer Crt., 33 St Mary Axe London EC3A 8LL, United Kingdom) was hired to take part in this process, according to the company web site.
Regarding the canal’s location, the HKND Group has decided that the Canal will not run through the San Juan River, which has been the focus of territorial disputes between Nicaragua and Costa Rica. ERM will independently assess the environmental and social impact of various other, unspecified routes.

The Nicaragua canal idea is not a new one. The US and Nicaragua signed the Bryan Chamorro Treaty in 1914, which gave the US exclusive rights to construct any canal in Nicaragua in perpetuity, a ninety-nine-year option to build a naval base in the Gulf of Fonseca, and a ninety-nine-year lease to the Big and Little Corn Islands. Both the naval-base option and the lease for the islands were included in the treaty for defense of the Panama Canal. Nicaragua, in return, received $3 million dollars, which was used primarily to repay Nicaragua’s creditors. US involvement in a possible canal project diminished in subsequent decades, and the Bryan-Chamorro Treaty was abrogated in 1970. Canal-related discussion in Nicaragua persisted, however. Reports in 2008 suggested that Russian President Dmitry Medvedev was interested in the Nicaraguan canal project. 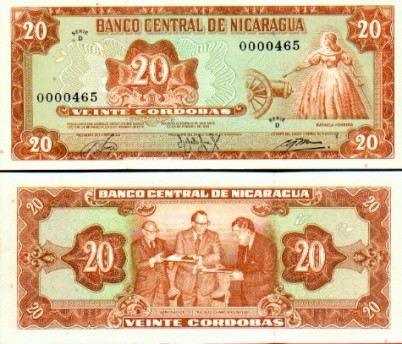 Bryan-Chamorro Treaty repeal featured on 20 cordoba bank note
It would seem that the possibility of a Nicaragua canal is as high now as it has ever been. HKND and Nicaragua’s canal Authority (as established in Ley 800) must now convince investors that construction of a second Central American canal is a viable and profitable venture.