As oil prices drop, Venezuela and Ecuador are turning to China for more in the way of financial support.

Few concrete results were announced during the visit, however, aside from a “cooperation agreement” with CDB, apparently for continued support of existing financing arrangements.

China’s major banks – e.g.,  CDB, China Eximbank, and ICBC – have already provided upwards of $50 billion in financing to Venezuela since 2005, much of that in the form of multi-billion dollar, oil-backed loans for use on social and economic development projects in Venezuela. President Xi Jinping’s announced a $4 billion disbursement to South American nation just last summer.

Though one of Venezuela’s top creditors, China is acutely aware of Venezuela’s woes. The dip in oil prices undermines not only Venezuela’s oil sector but also its overall political stability. Oil makes up more than 95% of Venezuelan exports, providing a critical source of foreign currency.  The nearly 50% plunge in international oil prices since June to less than $60/bbl has depleted Venezuela’s only source of US dollars needed to import everything from car parts to toilet paper and essential food items. If and when this economic strain will lead to a political crisis is hard to predict, but that seems to be something China would prefer to avoid.

China’s loans to Venezuela are therefore less an indication of confidence in Caracas than an effort to maintain stability in Venezuela. China is heavily invested in Venezuelan oil. And Beijing feels that underwhelming production is better than no production at all.

To somewhat alleviate Venezuela’s debt burden, the two countries recently amended their Joint Venezuela-Chinese Fund Agreement, modifying the terms governing Venezuela’s contribution to the fund and the repayment of Chinese loans. Venezuela also recently added Chinese funds to its foreign reserves. It was rumored, moreover, that Venezuela would give China one of its Caribbean islands to defray its debt.  That claim has since been dismissed by the Chinese Ministry of Foreign Affairs, however.

It’s now Correa’s turn to cross the Pacific. As reported by Bloomberg, the Ecuadorian president is planning his own trip to Beijing in January to ask for new loans. It’s unclear whether Correa’s bid will be more successful, but as in Venezuela, China is invested in Ecuadorian oil production and active in the planned development of the Yasuni.

The oil price outlook for next year is highly uncertain and South American oil producers are likely getting nervous. Global oil demand growth has been tepid but could increase amid lower fuel prices, eventually driving prices back up. On the supply side, Saudi Arabia appears to be standing its ground against production cuts unless other OPEC producers do their part. And US shale production remains steady for now, but fears of a prolonged oil price slump may lead some operators to cut investment plans and reduce drilling activity in marginal plays. Any drop in global oil production could also reverse the current bear market and push prices up.

This uncertainty is especially tough on oil-dependent countries that have not taken measures to protect themselves against market volatility. In contrast, Mexico, whose government is heavily reliant on oil export revenues, hedged its exports earlier this year, locking in a price of $76.50 per barrel. For Venezuela and Ecuador, though, global oil market volatility makes their relationship with China more important than ever. 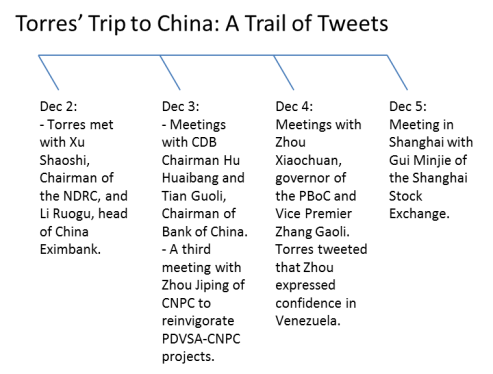